CAMDEN, Tenn. – Hunter Hollingsworth, at first, didn’t grasp it was a surveillance camera giving off the glint in the sun from a high tree branch about a mile past the no-trespassing sign that marks his family’s remote property in west Tennessee.

But something about the shine made him stop his truck. By the time he’d climbed up to investigate, grab the gadget lodged in the tree, drive home home and examine a SIM card, Hollingsworth understood there was a surveillance device trained to capture his movements for months in a 24-7 live feed viewable to officials with the Tennessee Wildlife Resources Agency, or TWRA.

Hollingsworth’s 2018 discovery, and the string of events that followed, have led to a years’ long legal battle with state wildlife officials over his right to privacy free of government intrusion and video surveillance on his own property.

It’s a fight, Hollingsworth said, that has proved consuming over the past four years — straining his relationship with his girlfriend at times while keeping on a slow burn the spark of rage he first felt seeing images of himself and his friends in secret government surveillance footage on the SIM card. Hollingsworth’s long legal battle may soon be reaching a head.

A three-judge panel, convened in Benton County last December, is weighing Hollingsworth’s challenge to the constitutionality of TWRA’s practice of conducting warrantless patrols, searches and surveillance on private property.

It is a practice rooted in a tennessee law that gives TWRA the right to search and surveil private property in order to enforce hunting, fishing and wildlife laws – an authority not explicitly extended to any other state or local law enforcement, including county sheriffs or local police.

Officials with the Tennessee Wildlife Resources Agency say a US Supreme Court over ‘open field’ doctrine gives Tennesseans no expectations of privacy, but lawyers for Hunter Hollingsworth and Terry Rainwaters say the policy conflicts with the Tennessee Constitution.

TWRA officers may “go upon any property, outside of buildings, posted or otherwise,” the law says.

Hollingsworth — along with his neighbor, Terry Rainwaters, who claims TWRA engaged in warrantless searches on his property, too — have asked the panel of state judges, convened under a new law requiring panels for state constitution claims, to find the law unconstitutional.

Represented by attorneys with the Institute for Justice, a libertarian-leaning nonprofit law firm, the pair have argued that TWRA’s warrantless forays onto private property violate Article 1, Section 7 of the Tennessee Constitutionwhich says in part:

“The people shall be secure in their persons, houses, papers and possessions, from unreasonable searches and seizures.”

“If they can just come at will, whenever they want and wherever they want, what’s the value of private property?” Holllingsworth said in an interview earlier this month.

“If they’re going on private land, they should have to get a warrant. They abuse their authority and nobody has a check on it. If hunting over bait (illegally luring game through bait) is so much worse than trafficking kids or other serious crimes that need a warrant, then they need a warrant.”

Hunter Hollingsworth points out the area in which he found a camera installed by the Tennessee Wildlife Resources Agency. (Photo: John Partipilo) 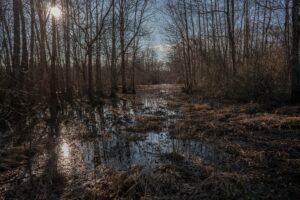 A portion of the 90 acres owned by Hollingsworth’s family. (Photo: John Partipilo) 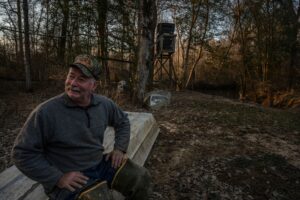 “If they can just come at will, whenever they want and wherever they want, what’s the value of private property,” Hollingsworth asks about TWRA authority. 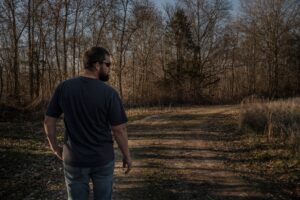 Hunter Hollingsworth walks the Benton County property his family has owned since he was a teenager. (Photo: John Partipilo)

US Supreme Court and the Tennessee Constitution

TWRA officials said last week they do not comment on pending litigation, but in legal documents and in affidavits filed in the case state wildlife officers said they must have the flexibility to enter private property to do their jobs. The agency’s mission is to protect wildlife and to enforce hunting, fishing and boating rules.

Because 90 percent of the land in Tennessee is privately owned and where the majority of hunting takes place, TWRA officers cannot do their jobs without patrolling private property, attorneys for TWRA have argued.

TWRA has also cited a well-established US Supreme Court precedent, known as the “open fields” doctrine. The doctrine says that property owners have no “reasonable expectation of privacy” on private lands deemed to be an open field — property that is outside the immediate vicinity of an owner’s home and yard, like a field of crops outside the farmer’s homestead.

The US Supreme Court has found that warrantless searches in open fields do not violate the Fourth Amendment’s guarantee against unreasonable searches and seizures.

Joshua Windham, attorney with the Institute for Justice representing Hollingsworth and Rainwaters, said the Tennessee Constitution provides its own protections and the law giving TWRA the right to warrantless entry on private property clearly conflicts with the state constitution.

“It’s an agency of law enforcement that believes it has complete discretion,” said Windham, noting no other law enforcement agency in the state has the same powers for entering private property without a warrant as TWRA has spelled out in state law.

If they’re going on private land, they should have to get a warrant. They abuse their authority and nobody has a check on it.

An armed raid, then charges of theft

Hollingsworth has been hunting on the 90-acre property, a mix of marshy habitat, fields and tree cover, that has been owned by his family since he was a teen.

The site is accessible only through a gate marked “private property” that leads to a primitive dirt driveway, first winding through his neighbors’ property before reaching the vacant land his dad bought 25 years ago.

The land is set aside purely for hunting and recreation, Hollingsworth said. He and his friends have hunted rabbits, turkeys, deer, ducks and raccoons there since he was a teenager, he said. He and his girlfriend have also occasionally camped on the property.

The camera, Hollingsworth said, was an acute invasion of privacy, capable of capturing images of him being intimate with his girlfriend, relieving himself in the outdoors and partying with his friends.

But what happened after he discovered the secret surveillance troubles Hollingsworth more.

Weeks after he discovered the secret camera, he heard a knock at the door to his home, located on a separate property.

It was early in the day and Hollingworth and his girlfriend weren’t fully dressed. Outside were at least half a dozen men dressed in khaki pants and bullet-proof vests, including at least one armed with an assault rifle, Hollingsworth said. Frightened, Hollingsworth’s girlfriend ran for the bedroom.

They were both detained and arrested.

Weeks after Hollingsworth discovered the secret camera, TWRA agents showed up at his house–armed–and arrested him for for illegally hunting waterfowl, a charge he denies. Agents also charged him with stealing the surveillance camera he found on his property.

He and his girlfriend were also charged with a 7th count: stealing the surveillance camera secretly installed on his property.

The camera, according to court filings, was installed after agents with the US Fish & Wildlife Service were contacted by TWRA officers alleging Hollingsworth was violating federal game bird regulations. Federal authorities did get a warrant for the camera. In short filings, TWRA officials noted that the warrant was unnecessary.

In the course of the lawsuit Hollingsworth and his neighbor later filed, scores of video and photographic evidence emerged showing instances when TWRA officers, armed with their own cameras and audio recording equipment — and sometimes crouched behind bushes — captured Hollingsworth and friends shooting game.

While sportsmen are required to wear bright clothing as a signal of their presence to other hunters, TWRA officials are not, creating a potentially dangerous situation during surreptitious surveillance, Windham said. Video taken by TWRA officers show them in the line of fire for hunters.

Some videos captured TWRA officers trudging through the isolated Hollingsworth property and narrating their surveillance of corn kernels near duck blinds or wet fields with corn cob remnants.

Audio evidence filed in the case captured at least one occasion when Hollingsworth was on his property when confronted by TWRA officials.

“Ain’t no sense you coming down here every time I hunt,” Hollingsworth responded. “Ain’t nobody invites you.”

“When you bought your hunting license you invited me,” the agent responded.

Hollingsworth later pled guilty to one charge of baiting wildlife—an allegation he still denies. He lost his hunting license for three years. The charges against his friends and girlfriend were dropped.

“I’m not saying I never did anything wrong,” he said. “But they threatened to charge my girlfriend because she lives with me. She would have lost her job because she needs to travel for work. She doesn’t have anything to do with hunting.”

What is it and why you should be worried

Senegalese island keeps coastal erosion at bay with stakes in the...

The newest superfood is good for humans and the planet |...

‘I was mentally on a different planet’

Graham had no businesses making calls to GA on behalf of...

Americans Likely to Be Tracked for CO2 Emissions Under SEC’s New...

Extensive wildlife testing for PFAS could result in more ‘do not...

Black - July 25, 2022
0
Nearly eight months after the Maine Department of Inland Fisheries and Wildlife issued a “do not eat” advisory for deer harvested in Fairfield because...
Wildlife

Wildlife oil spill rescue: Inside look at the fight to save...

Black - June 25, 2022
0
A brown pelican was the first casualty of the oil spill, wildlife officials said. The bird was euthanized Sunday after it was...