FLAGSTAFF – Ed Jahrke drives his big white pickup down a winding, choppy dirt and gravel road into the Coconino National Forest. He’s the habitat implementation program manager with the Arizona Game & Fish Department, and on this day he’s working with contractors to finish a system to collect and store rainwater for wildlife to access as needed.

“The need to put water out there for wildlife is more important than ever,” Jahrke said.

Before this year’s plentiful monsoon storms, drought conditions in Arizona were steadily worsening. At the start of July, most of the state was experiencing extreme to exceptional drought, according to the US Drought Monitor. As of mid-October, the majority of the state is listed as “abnormally dry” or in “moderate drought” – but the past 20 years of below average rainfall have created great needs for water conservation.

Jahrke and his team hope to have this water catchment system, which is just a few miles east of Flagstaff, completed in time for the winter rains expected in December and January.

About 3,000 catches have been built in Arizona over 75 years, and many need to be repaired or replaced.

“We started building these in the ’40s and ’50s,” Jahrke said, adding that they originally were constructed by quail hunters who wanted to ensure adequate water for the popular game bird. Eventually, Game & Fish started working with the hunters as the catchments drew other types of wildlife, including deer, bobcats and bighorn sheep.

Many of these catchments were constructed by the US Forest Service, but no maintenance was ever done, Jarhke said.

This 3,000 gallon metal water tank, which was installed in the 1980s, has been removed and will be replaced by a 15,000 gallon system. (Photo by Balin Overstolz-McNair/Cronkite News)

“They had to spend all their budget fighting fires,” he said, leaving the difficult task of maintaining the catchments to dedicated volunteers.

The Flagstaff project will replace a rusted old 3,000 gallon tank the Forest Service constructed in the 1980s. Jahrke said they went to the agency five years ago offering to redevelop it.

“We’ll foot the bill, we’ll do the work, just give us the paperwork to do it,” he said.

The new system will have a 48-foot by 36-foot collection area, which will drain into a 15,000 gallon system of white polyethylene tanks that feed the water into a separate drinking tank for animals. The drink tank isn’t large – it would hardly make an adequate Jacuzzi for two people – but it’s enough to keep wildlife alive in dry times.

“Animals will smell that drink from miles away,” Jahrke said.

A dedication to wildlife

Jahrke’s background in construction made him the right person for the position he holds now, but he was a passion and respect for fish and wildlife that led him to Game & Fish.

Jahrke moved to Arizona in 1980, working in the show horse industry and as a stone mason. On weekends, he would go fly fishing, and he got “hooked.” One day while fishing in the Apache-Sitgreaves National Forests in eastern Arizona, he met a Forest Service biologist who told Jahrke he needed a wildlife degree to pursue a similar path. Jahrke began attending night school shortly after. 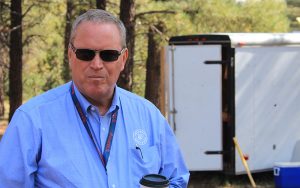 Ed Jahrke with the Arizona Game & Fish Department is overseeing the renovation of a water catchment system near Flagstaff. The upgrade is expected to be finished before winter weather sets in. (Photo by Balin Overstolz-McNair/Cronkite News)

One of his first jobs after graduation was as a native fish biologist working for the Game & Fish Mesa office, which he called his “dream job.” But one day while collecting data, as he and his team drifted down a river on a canoe, they came across a Ford Bronco abandoned in the water leaking transmission fluid.

Jahrke thought to himself, “I need to get myself a gun and a badge.”

He was accepted into the wildlife manager program and trained for law enforcement, but eventually was asked to move into administration. His desire to preserve and protect wildlife led him to his current position as habitat implementation program manager for Game & Fish, where he oversees projects like this updated water catchment in the forest outside Flagstaff.

“The cool thing about what I do is that when we’re done with a project, it immediately benefits wildlife,” Jahrke said. “I love the work I do.”

Wildlife often arrives soon after construction wraps up – and sometimes even before. A herd of elk have already visited the new development, despite all the construction. Jahrke said elk are inherently inquisitive animals, so it’s no surprise they weren’t spooked by the large machinery, parked trucks and the materials at the site, or the exposed catchment tanks.

Jahrke believes that endangered California condors are one of the important species to benefit from the catchments. More water means more reliable animal populations, and more animals means more carcasses for the condors and other scavengers. 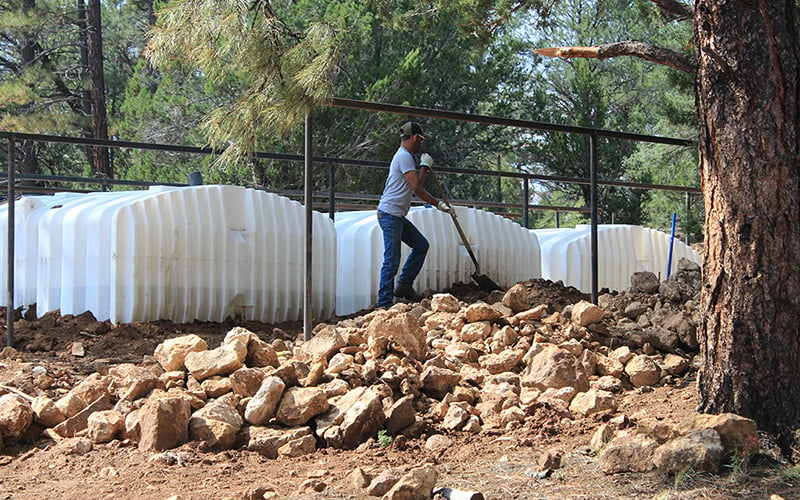 A roof will help collect rainwater to fill the 15,000-gallon catchment. The goal is to make sure wildlife have water when they need it. (Photo by Balin Overstolz-McNair/Cronkite News)

Multiple studies were done before breaking ground on this water catchment to ensure the natural habitat would not be harmed. The catchments are a vital resource for animals to use, but only when they need it, Jahrke said.

“When we get a lot of moisture, they tend not to use them,” he said, adding that wildlife want to travel, not be tied to one small, human-made watering hole.

Even with the significant payoffs of the water catchment systems, paying for them is a challenge. Game & Fish does not receive any state funding for this program.

Much of the money for these catchments comes from the Fish and Wildlife Service, federal grants, and from the sales and auctions of hunting licenses. Public donations also help.

Most of that funding is spent on one activity — hauling water. It can cost anywhere from millions to millions of dollars for each water delivery depending on where it’s going, the amount of water and where that water comes from.

Drought conditions have led to many of the catchments needing to be filled in recent years, especially during the hot, dry summer months. That means truckloads of water driven out or flown in by helicopter to the catchment systems scattered throughout the Arizona wilderness. Meeting those demands takes more than money, it takes volunteers to “Adopt-A-Catchment.”

Fish & Game gets help monitoring and maintaining catchments through the Adopt-A-Catchment program. It encourages volunteers to routinely check water levels, clean out gutters and collection points, and do light maintenance or repairs.

Tom Mackin, 75 “years young,” as he described it, is one of those dedicated volunteers. He has been retired for 14 years and has been volunteering ever since.

Mackin built an appreciation for wildlife growing up on a dairy farm. “I just love being outdoors,” he said. “I think I found out I’m solar powered.”

He began as a hunter education instructor, but the need for water in the Southwest piqued his interest.

Jahrke estimates Mackin has hauled close to half a million gallons of water in his years volunteering.

“It’s amazing how dedicated our volunteers are. We can’t thank those folks enough,” he said.

For Mackin, too, the satisfaction of making a positive impact on wildlife is worth the commitment.

“Water is the key” to the entire ecosystem, he said. “It does my heart good when I see hundreds of birds, squirrels, rabbits and other animals benefiting from the water.”

What are animal crossings? Do they help drivers and wildlife? | Opinion

The James Webb Telescope looks at the universe through the eyes...

Heat pumps can help save the planet. But can they...

Heat wave to hit Northwest as Northeast sees some relief

Black - July 22, 2022
0
While hiking around the Fishtrap Recreation Area...
Wildlife