Danny Handke, Senior Creative Director for Walt Disney Imagineering, confirmed that the Marvel Theme Park Universe is one branch of the multiverse that has opened in the MCU’s Phase Four. And the next destination to explore within that universe lies upon the Disney Wish.

Since Avengers: Quantum Encounter includes new narratives that have not been seen before off the ship, I’m gonna throw in a spoiler warning for those reading beyond this point. But for those who are cool with discovering what lies ahead for audiences on the Wish, Handke provided an excellent overview of the World of Marvel experience.

Worlds of Marvel topped my to-do list as I was planning our cruise on the Wish. This would be the place where Disney would be doing the most original storytelling on the ship, while trying to connect that narrative to an ongoing franchise elsewhere. I wanted to see how Disney would pull that off, while also creating a role for Wish guests that would allow us to feel as much an active participant in the production as we did one deck up in the Arendelle: A Frozen Dining Adventure show.

As promised, Ant-Man and The Wasp drive the narrative here, with Paul Rudd’s Ant-Man stealing the show with his earnest humor. Disney’s creative team might have looked back in MCU history to choose Ultron as the villain here, but it is looking forward by enlisting Sam Wilson’s Captain America, Captain Marvel, and the new Ms. Marvel as the heroes to help Ant-Man and The Wasp defeat Ultron.

Oh, and as Handke teased, that battle can’t be won without a final “push” from the Wish passengers in the Worlds of Marvel dining room.

Give Disney points for setting the production on the Disney Wish and for signing Evangeline Lilly, Anthony Mackie, Brie Larson, and Iman Vellani, along with Rudd, to reprise their roles. (No James Spader for the voice of Ultron, however.)

While I enjoyed Avengers: Quantum Encounter, its pacing did not mesh with the meal service as well as production at Arendelle – at least for me. In between acts, the Worlds of Marvel screens played clips from the various Avengers films, accompanied by graphics detailing the tech featured in each scene. The idea is to reinforce that we are dining at a Stark tech exhibition, but the non-stop visual action, accompanied by the fever-pitch theme music played in the restaurant, never gave us the opportunity to take a breath and fully relax while we ate.

It’s tough to chill out when the fate of the world is at stake, isn’t it?

That said, let’s look at the food that tried to distract us from the battles raging around the ship. We ordered one of each of the four available appetizers: 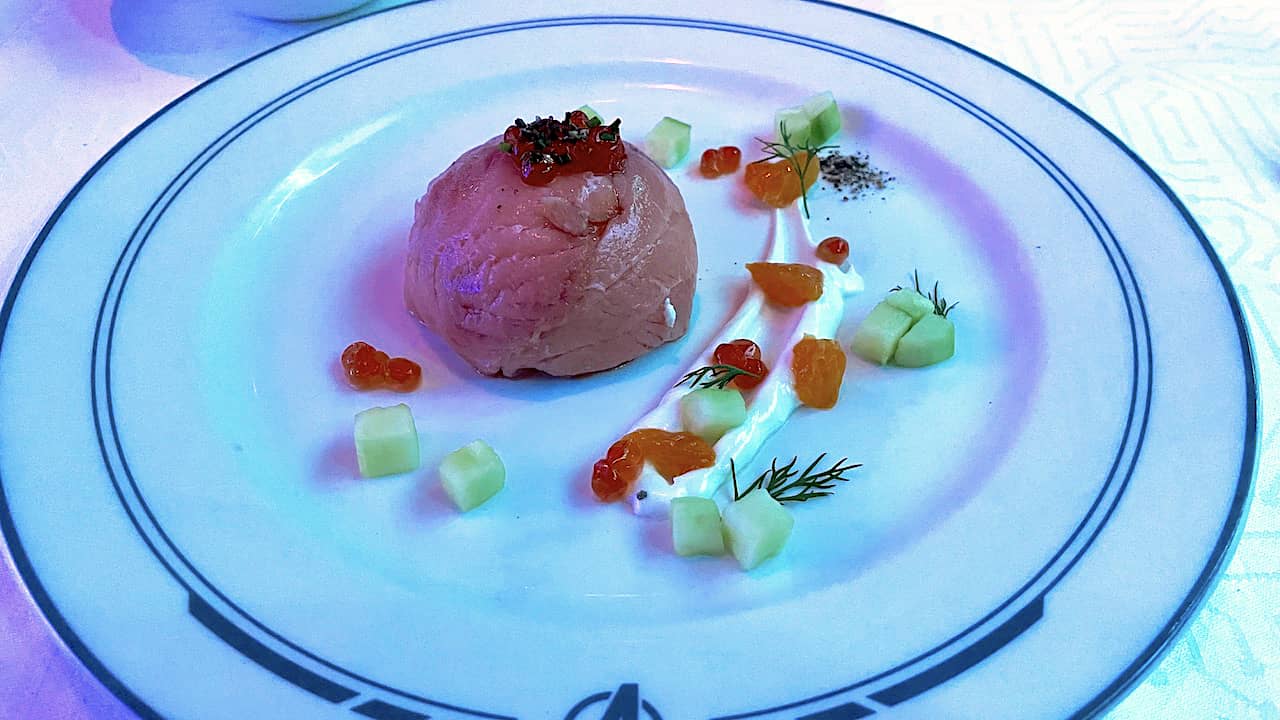 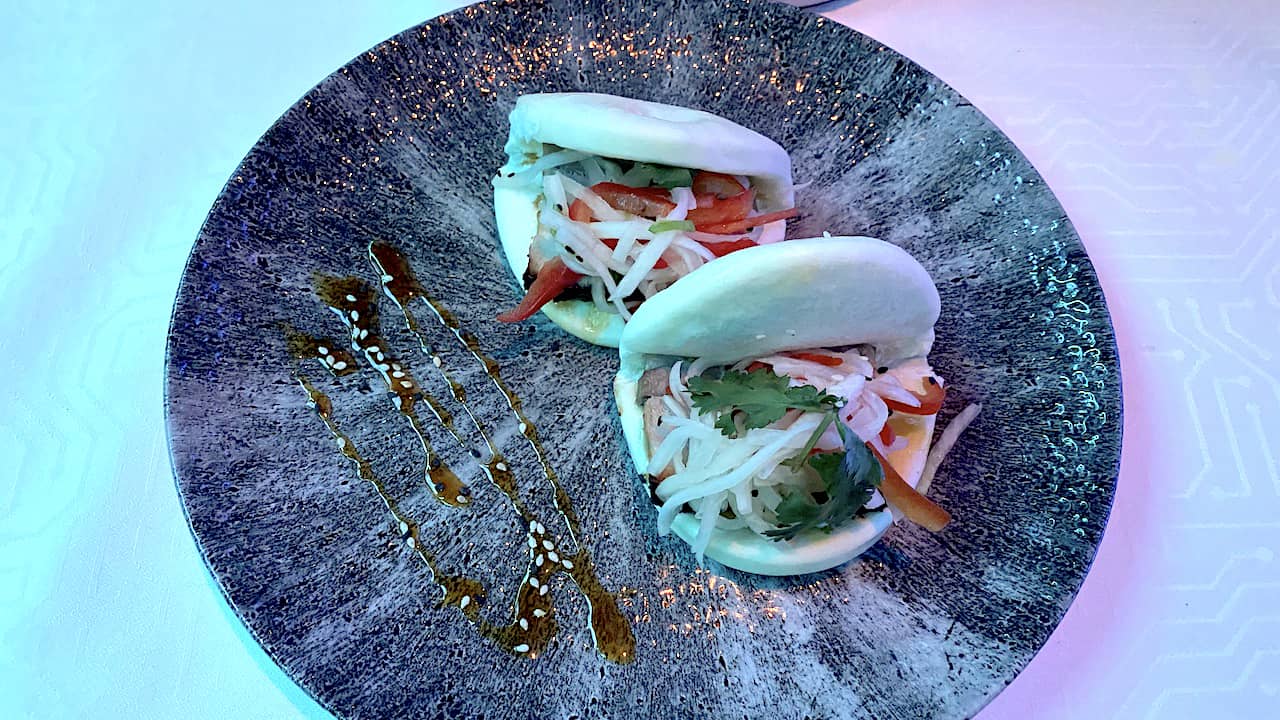 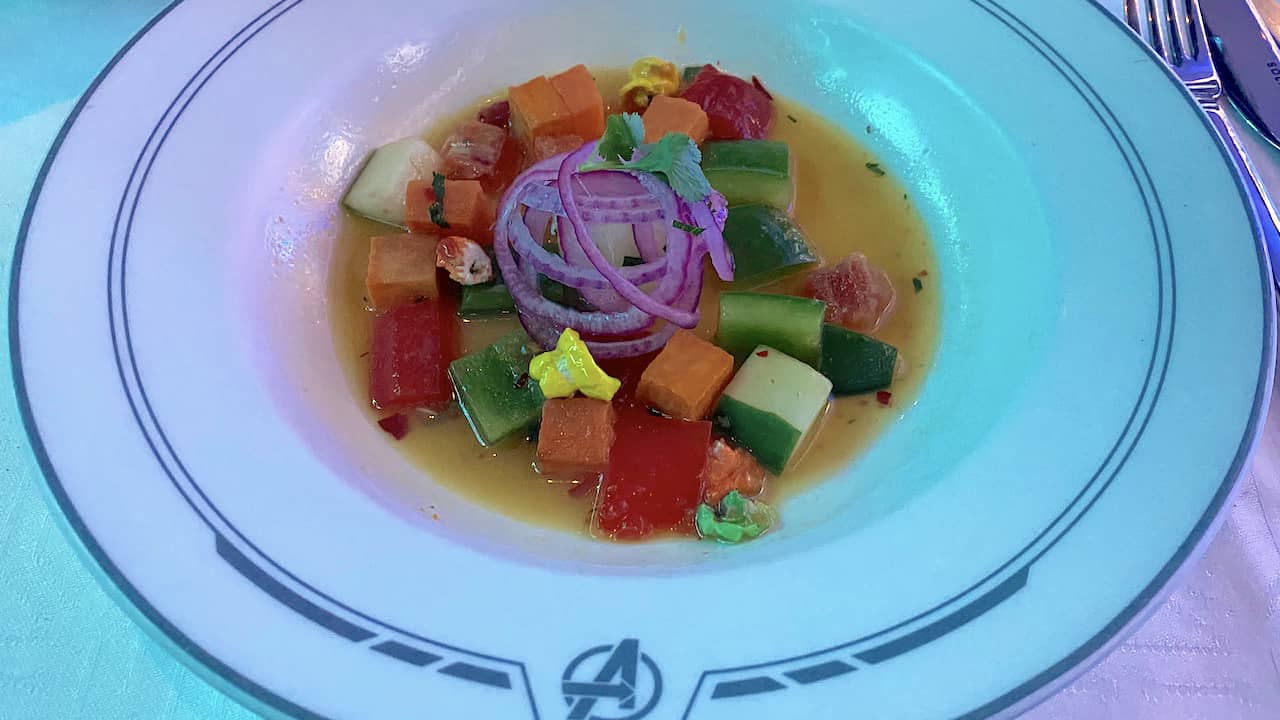 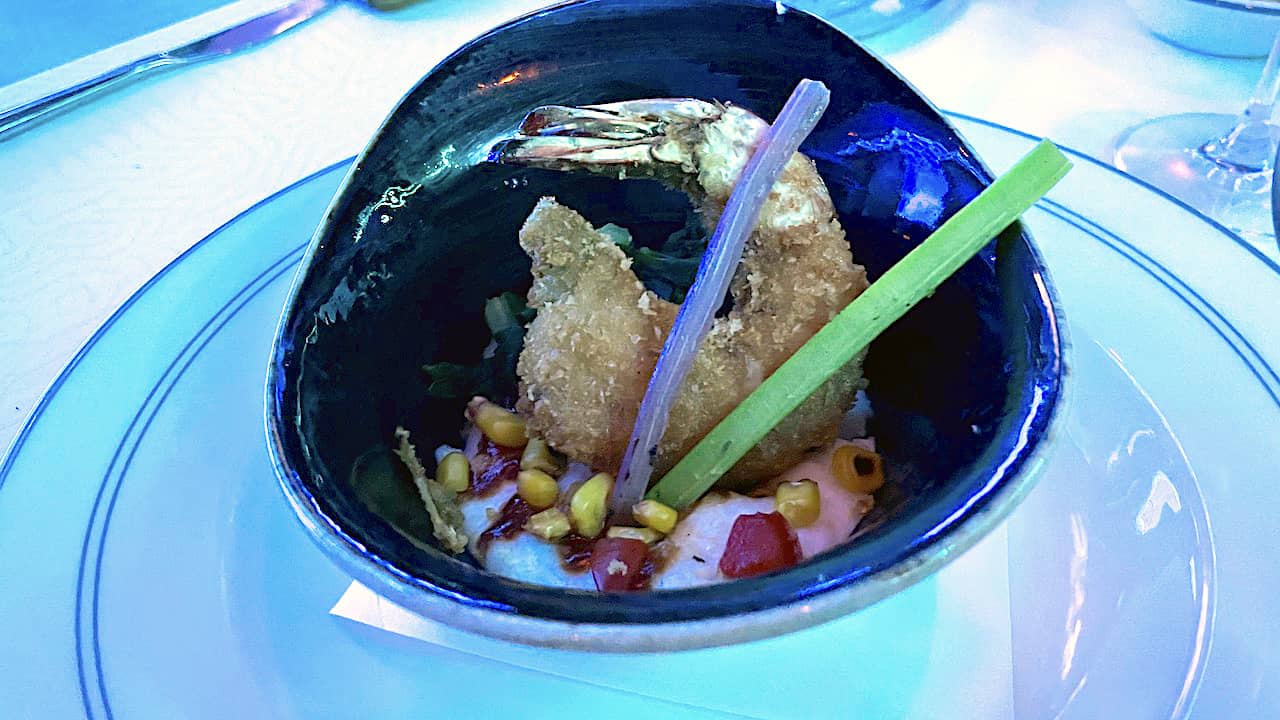 That’s a big shrimp, so big that all four of us could carve a bite and still have some shrimp left over. But I preferred the flavor of the salmon and especially the Bao, which was my favorite of the four. The ceviche tasted a bit astringent to me, as the veggies didn’t bring enough assertive flavor to balance the acidic marinade.

But that didn’t bother me as much as the next section of the menu, labeled “Wakandan Salads.” 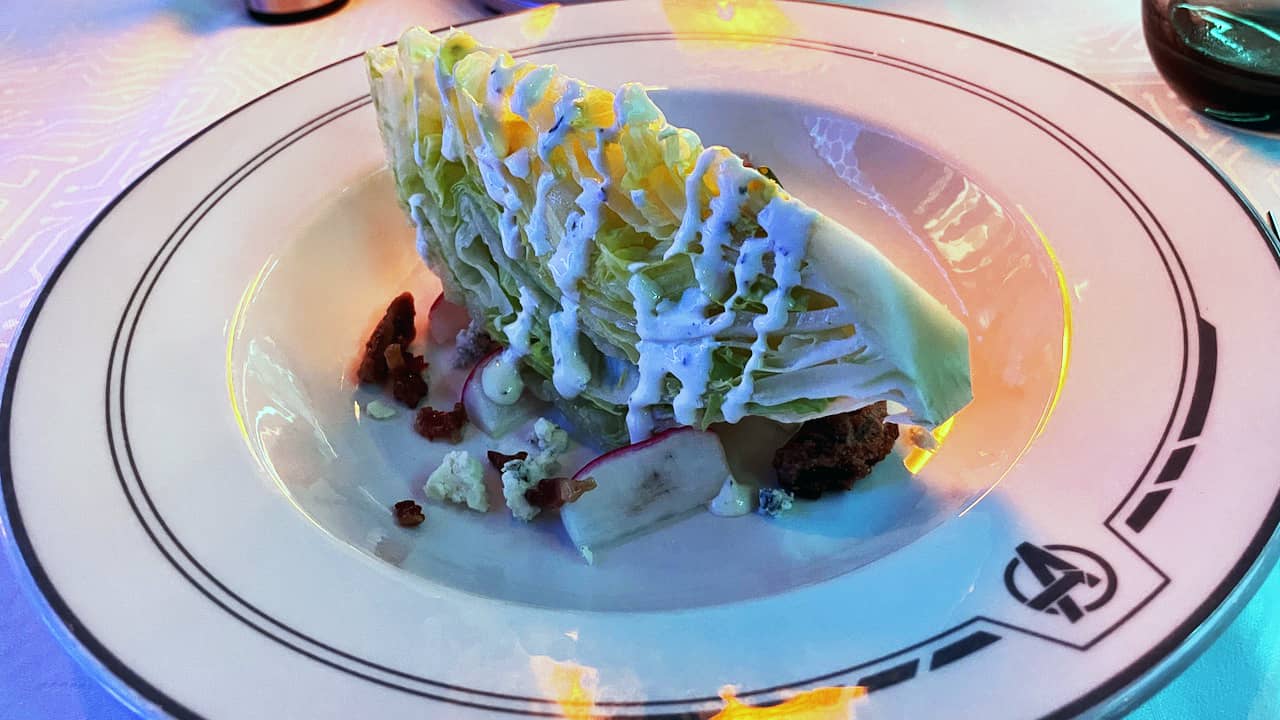 Excusez moi? You are putting the most basic, middle-America salad on the menu and daring to attribute it to… Wakanda? I can hear Chadwick Boseman’s T’Challa on SNL saying, “Aw, hell naw, Karen. Keep your bland-ass [salad] to yourself.”

And it was bland.

The soups are labeled as “From the Sokovian Kettle” and included Kartoffelsuppe, a Creamed Potato Soup with Carrots, Celery, Knockwurst, and Thyme (we didn’t order it), and a Cream of Porcini Mushroom Soup, with Sour Cream, Red Beet, and Lemon. 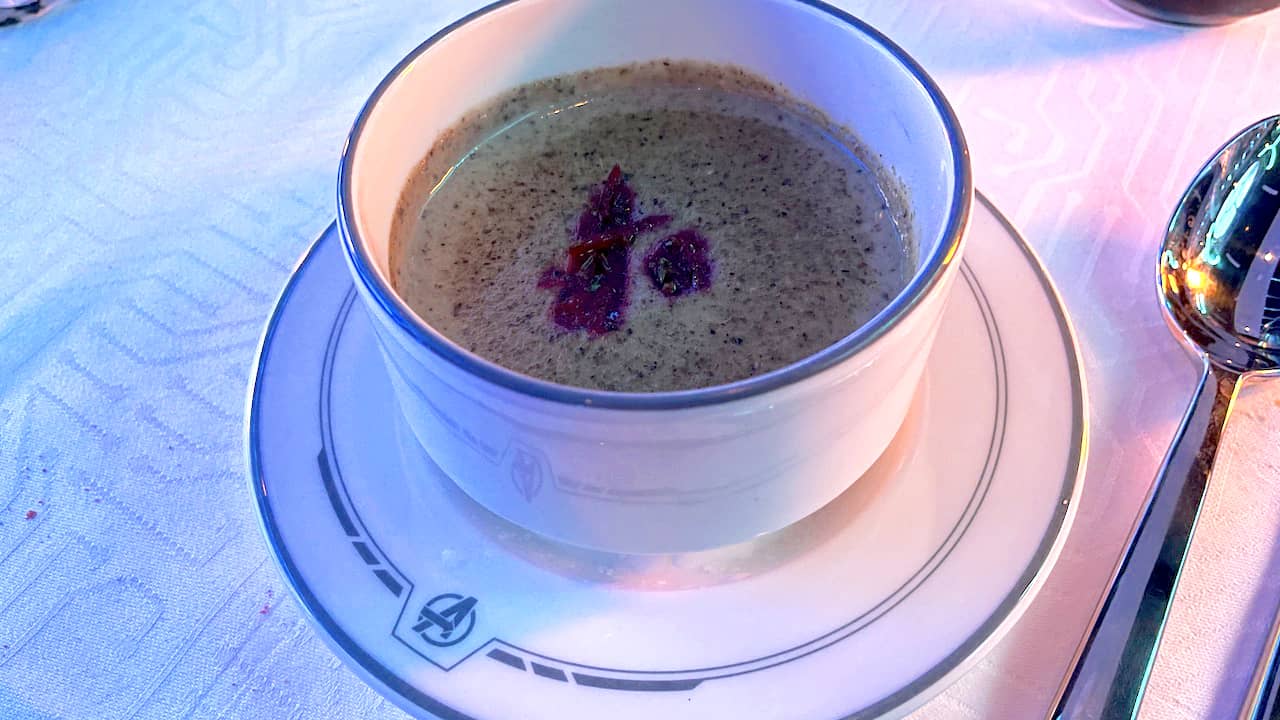 It tasted like a nice mushroom soup… with a dollop of Borscht in it. But where is the Paprikash?

Moving on, our entries were: 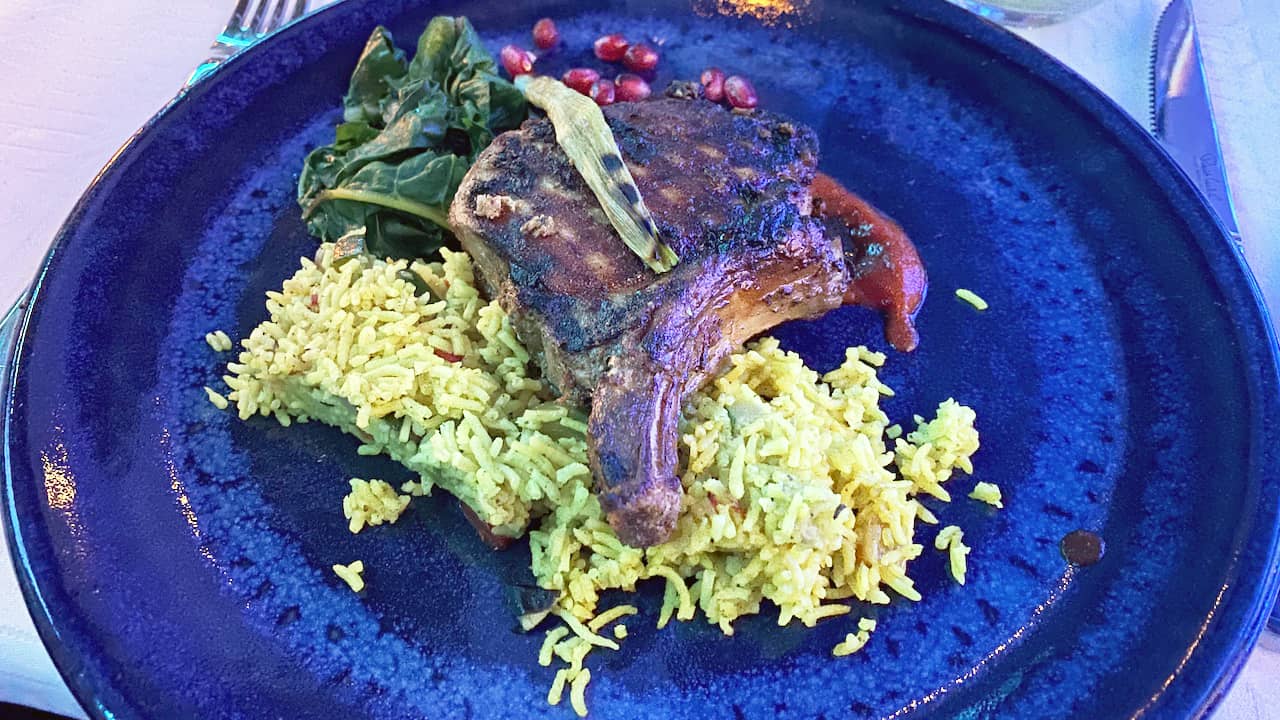 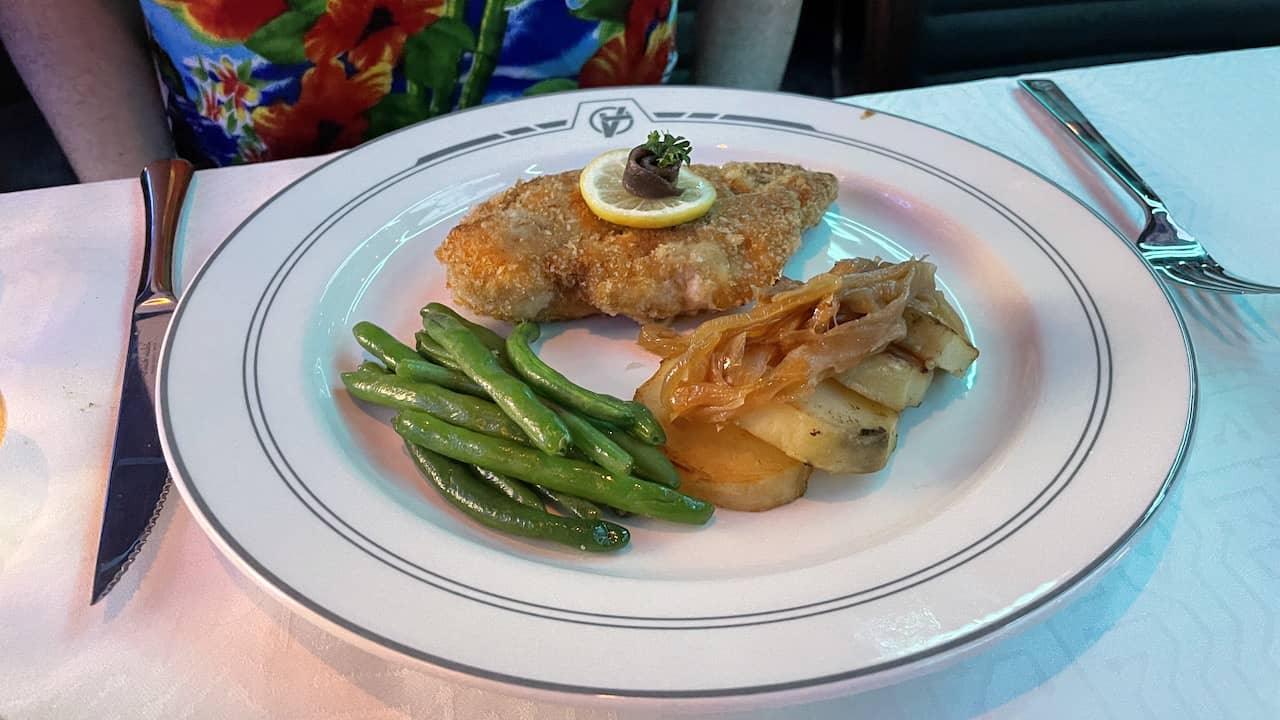 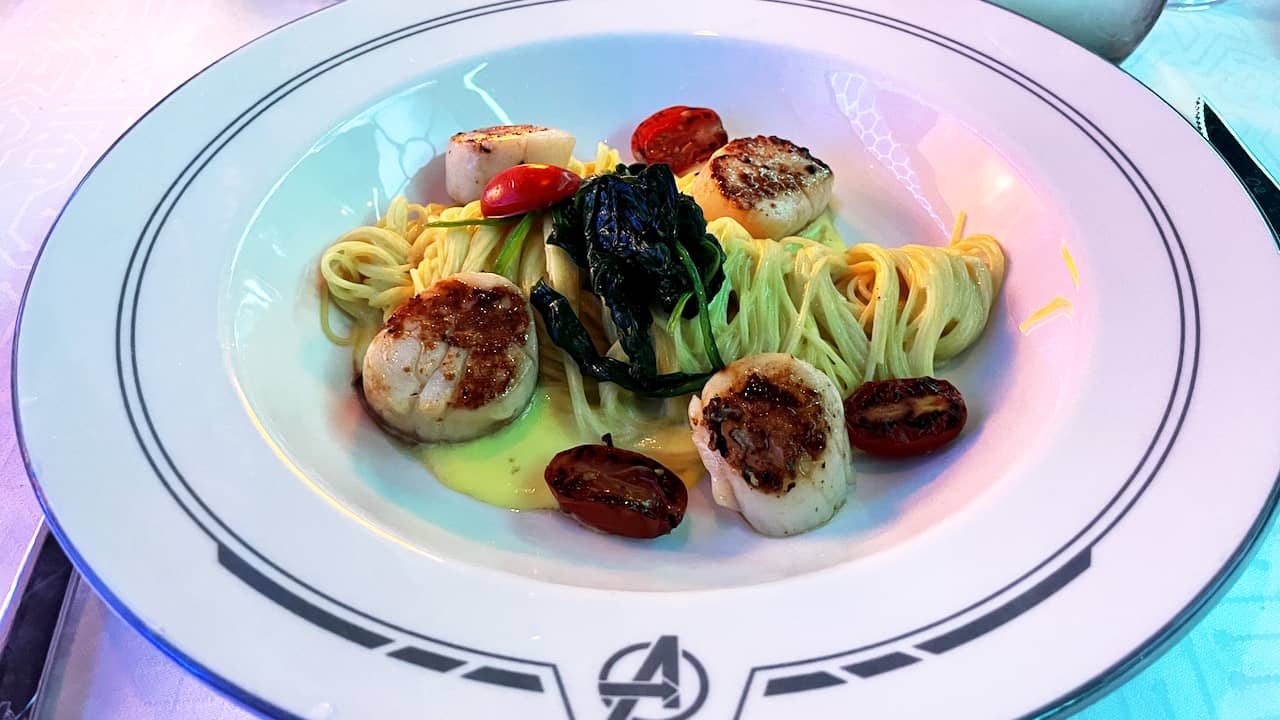 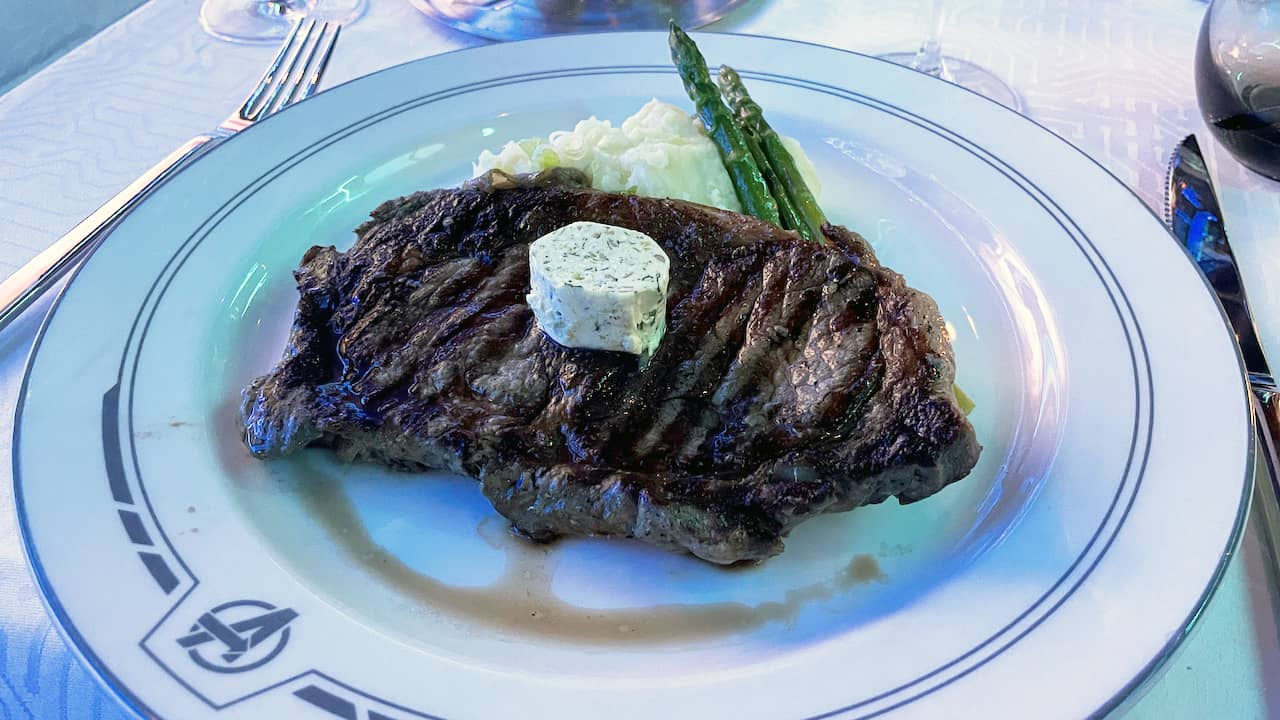 I loved the pasta, mostly because I was ready to tap out on anything heavy by Night Three of the cruise. The light cream sauce made the angel hair interesting, and I will never turn down a well seared scallop, as these were.

The table also endorsed the schnitzel, which was juicy and flavorful and served with a satisfying portion of sides, for a change. The pork chop offered nice flavor from the Berbere spice and accompaniments, though it fell victim to the common problem with pork of being a bit dry. The red pepper sauce effectively solved that problem, however, and blended well with the other ingredients.

The steak was a true rib-eye, prepared like a steak and not in prime rib style, as we had at Arendelle. But this specific cut was a bit chewy, though it appeared cooked to our order of medium rare. The truffle butter added delightful flavor, though. A couple of more asparagus spears on the side (without having to ask for them) would have been appreciated, though.

From the upcharge bar menu, the table ordered the “Wakanda Tasting Lab,” with three mixed cocktails of rum, gin, and vodka. 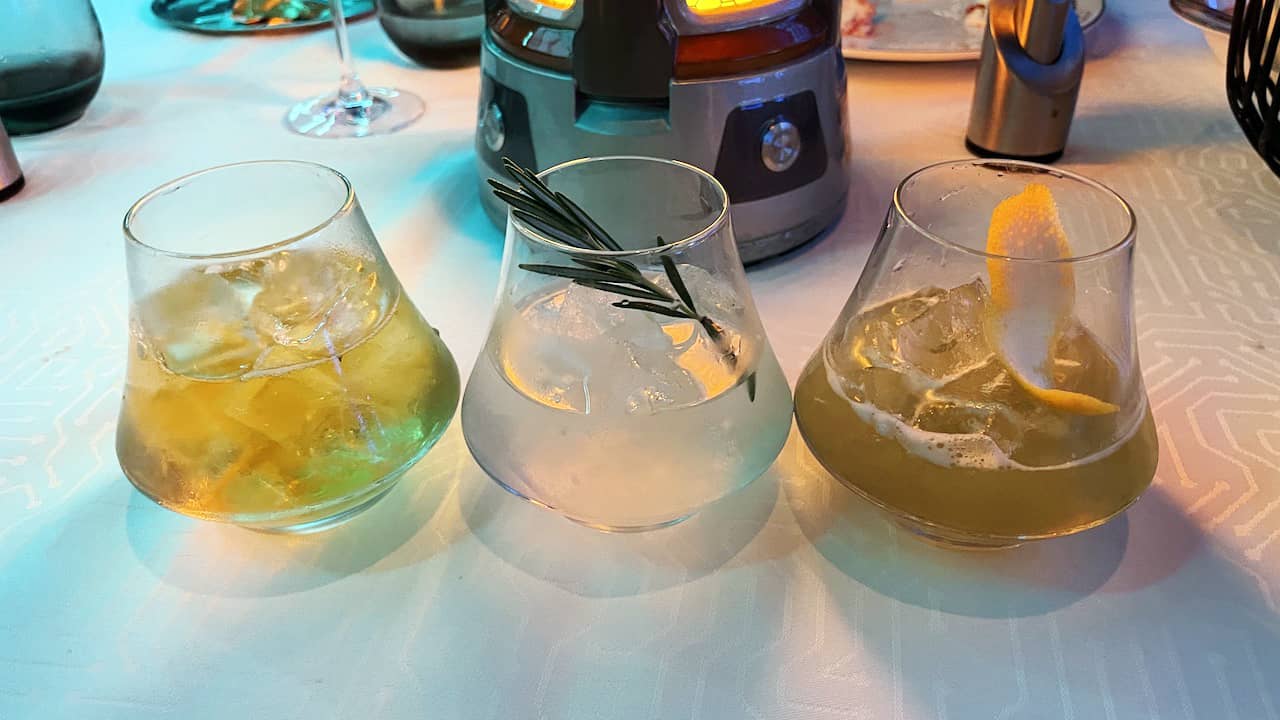 They were tasty, but strong, as we found consistently with dinner drinks aboard the Wish.

The show’s finale brought each table a plate of Pym Particle-shrunken chocolate chip shortbread cookies. Other than this item – which comes automatically and is not listed on the menu – Avengers: Quantum Encounter did not offer any of the mis-sized food that drives the menus at the Pym-themed restaurants in Avengers Campus at Disney California Adventure and Walt Disney Park Studios in Paris. 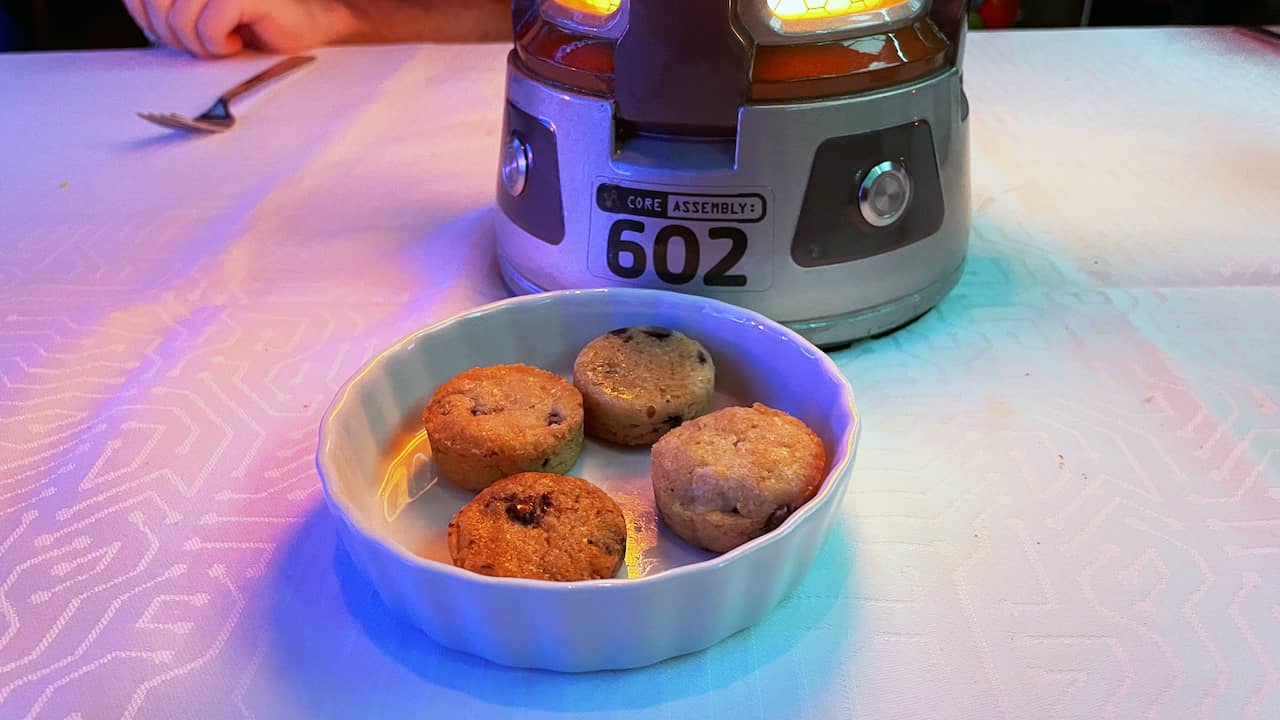 We all preferred these delightful cookies over any of the desserts we ordered from the menu. Again, after three nights of cruise eating, I think we were inclined to prefer one lovely little bite by this point over another onslaught of sugar.

Anyway, here they are, so you can gaze at them: 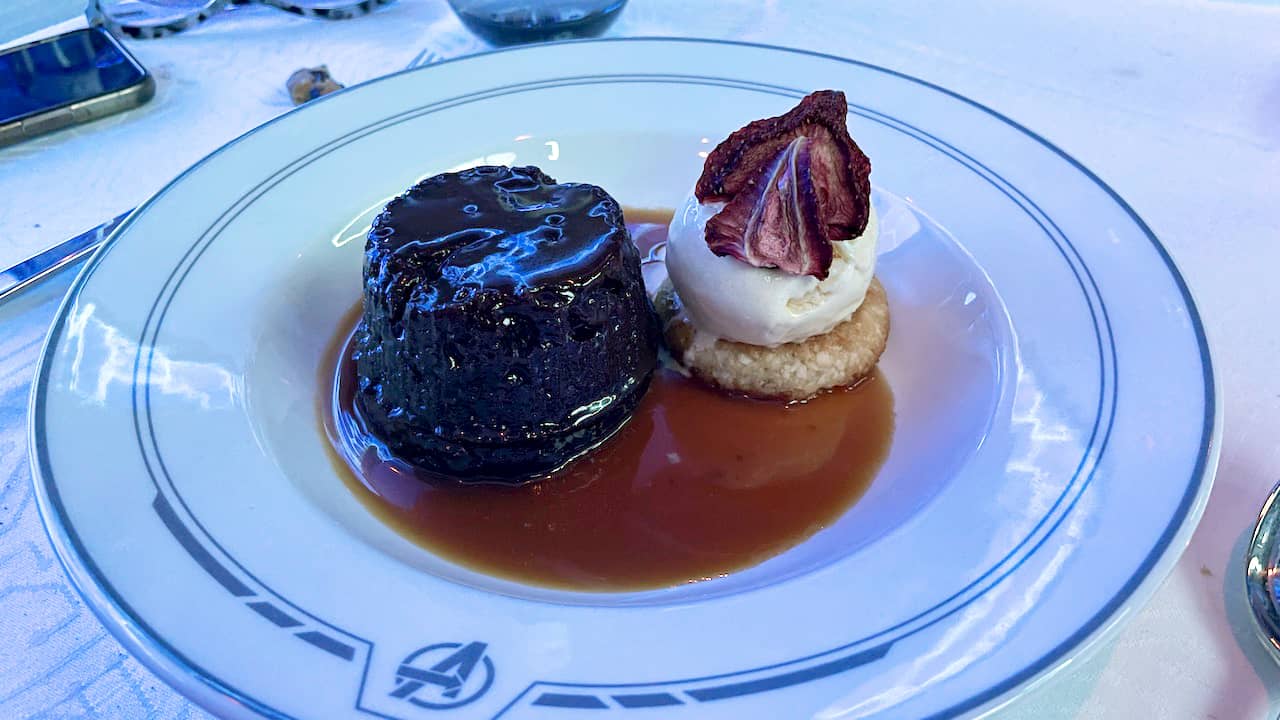 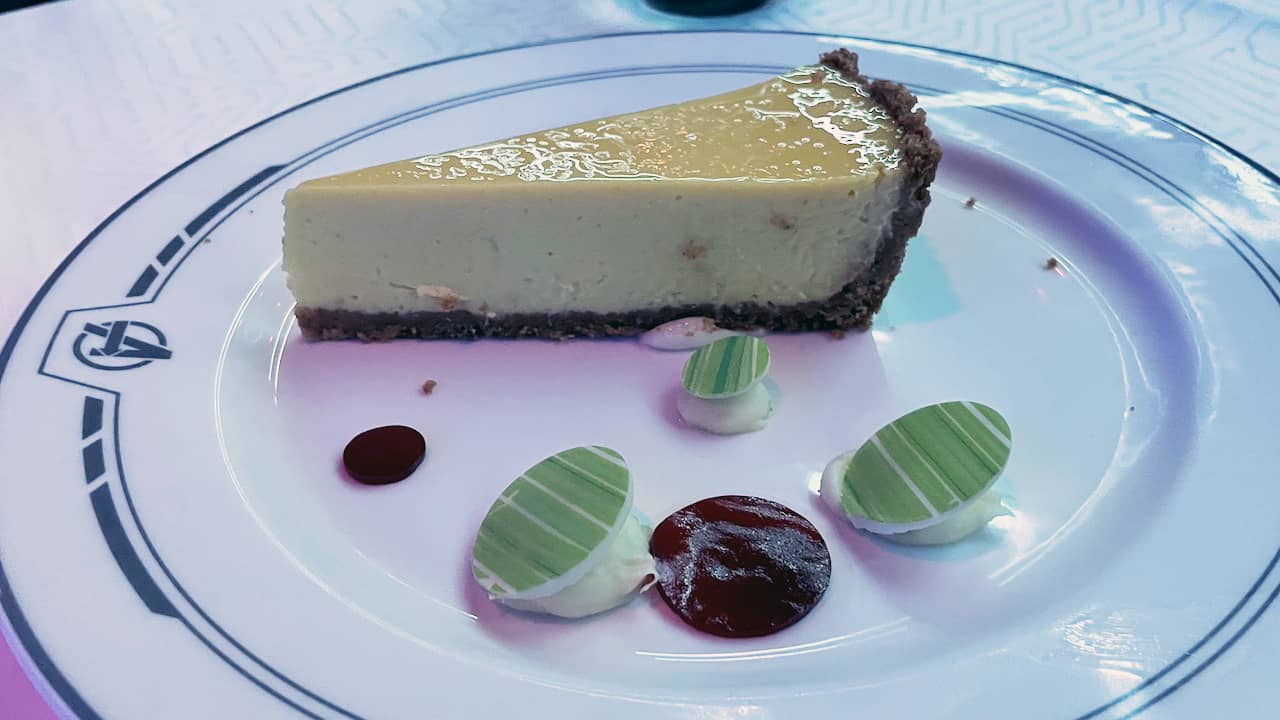 and a Nano Dobos Torta, a Layered Cake with Rich Chocolate Truffle Cream, and Caramel. 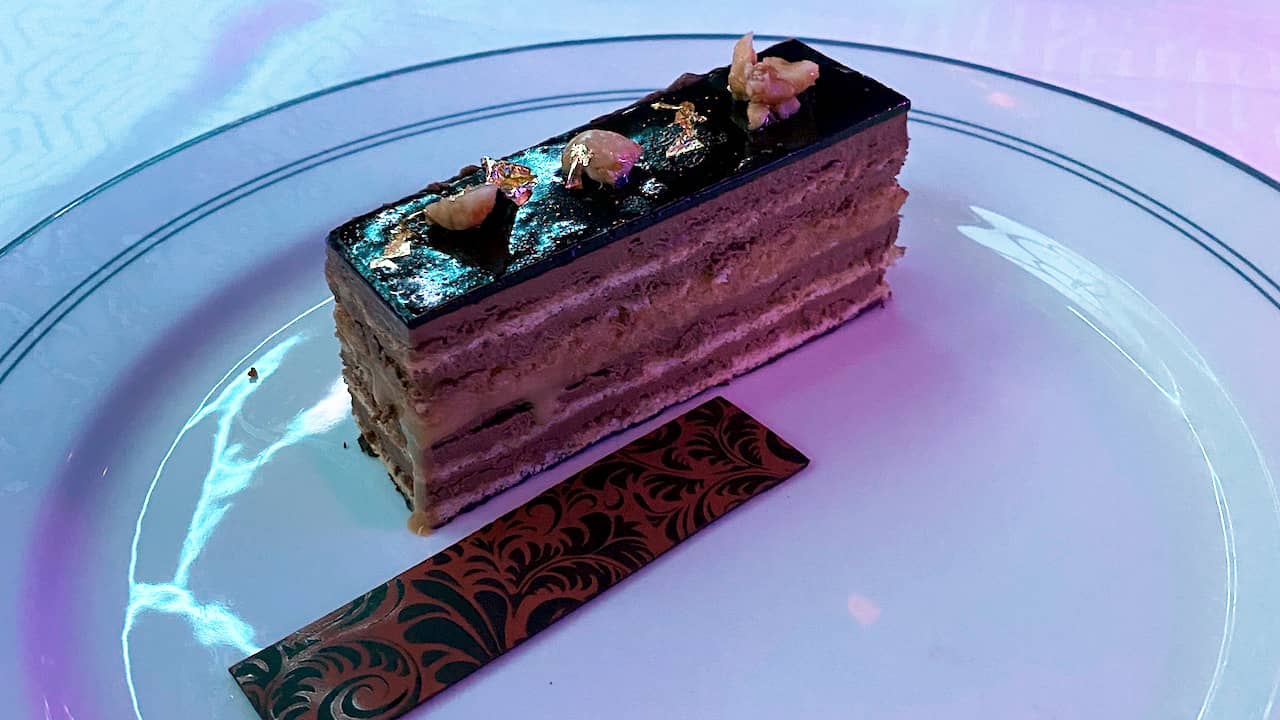 The Signature Dessert was the Cheesecake Byte, with Fresh Berries, Strawberry Jelly, and Whipped Cream. 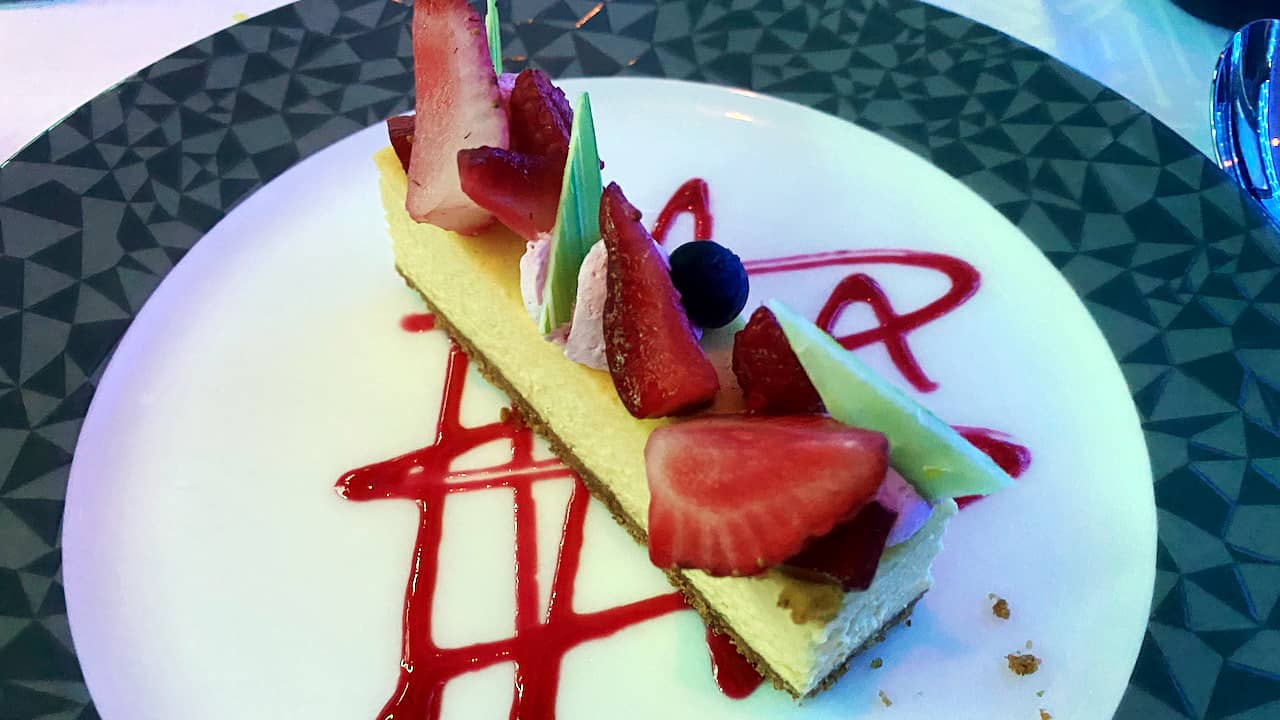 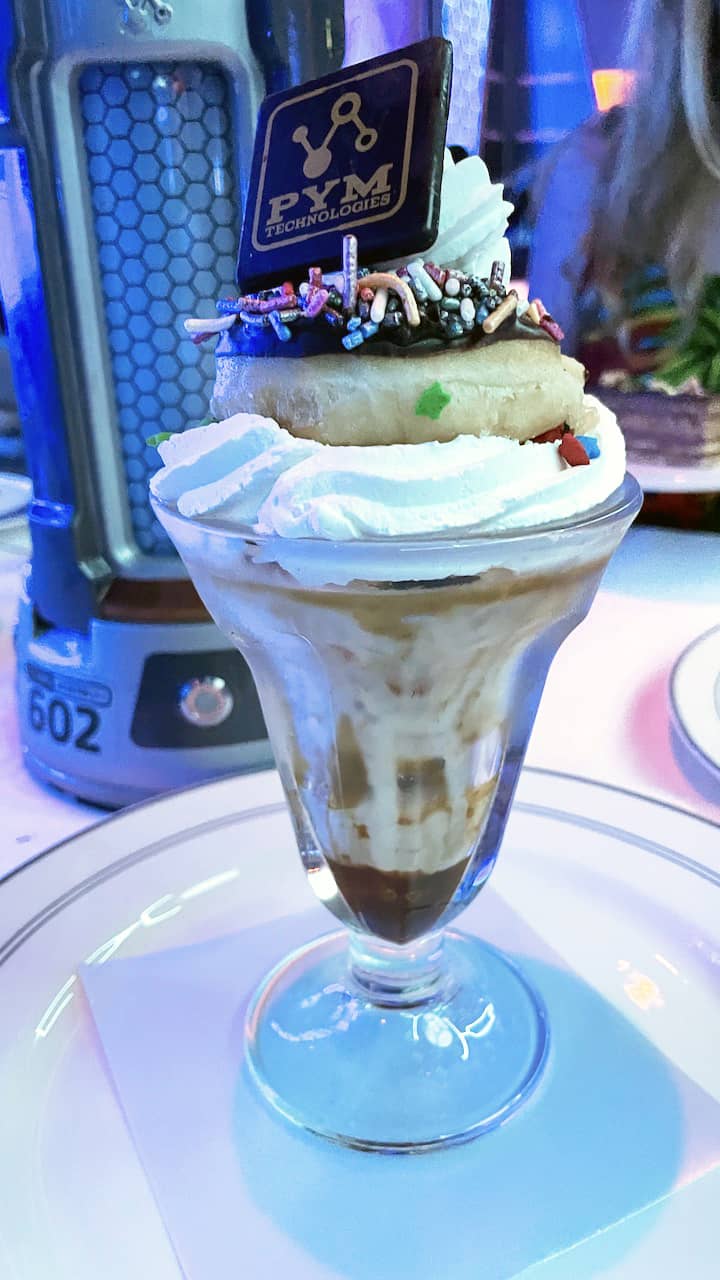 Overall, Worlds of Marvel maintains the excellent standard for tasty food, attentive service, and engaging entertainment that the Disney Cruise Line has established aboard the Disney Wish.

For all of our coverage of the restaurants, shows, attractions, and experiences aboard the ship, please see our post, All Aboard the Disney Cruise Line’s New Disney Wish.

‘Tales of the Walking Dead’ isn’t the worst ‘TWD’ spin-off, but it’s a wasted opportunity to build a more cohesive universe

The Moon Stole Something From Deep Inside Earth Eons Ago, and Scientists Can Prove It: ScienceAlert

Saturday Is ‘Saturn-Day!’ See The Ringed Planet At Its Biggest, Brightest And Best Of 2022 This Weekend

Cities embrace space when the solar system comes to town

The Arctic is warming up to four times faster than the rest of the planet, new study shows

The Webb Space Telescope Might Have Already Smashed Its Own Record

Soon, Humanity Won’t Be Alone in the Universe

The Hubble Space Telescope: What are its greatest hits? |...

We Finally Know Where the Highest Energy Cosmic Rays are Coming...

NASA Is About to Unveil The Deepest View of The Universe...

Black - July 11, 2022
0
Last week, NASA administrator Bill Nelson told us we'd see the "deepest image of our Universe that has ever been taken" on July...