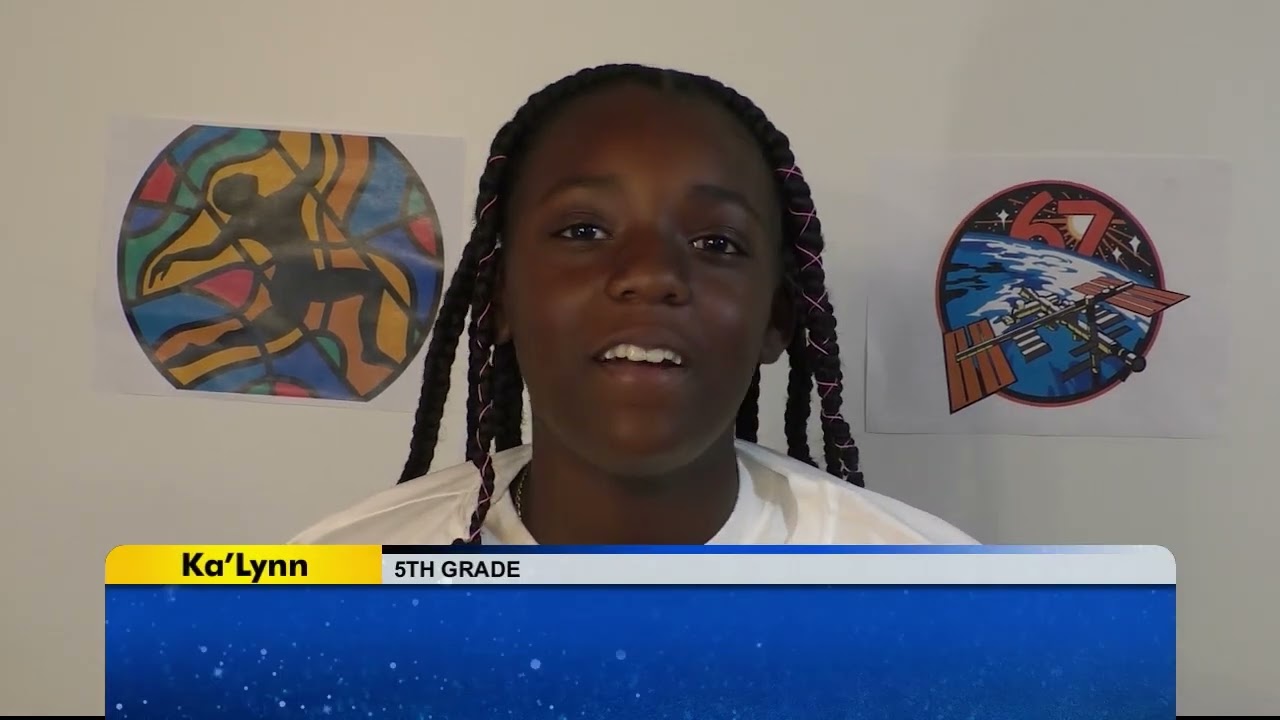 INDIAN RIVER COUNTY — Aiden Robinson, 7, of Gifford had a simple question for Astronauts Bob Hines and Jessica Watkins during a livestream conversation Wednesday between students at the Gifford Youth Achievement Center and the crew of the International Space Station.

“What kind of food do you eat in space?” Aiden asked Hines, the pilot of Crew Four, who, along with Watkins, answered pre-recorded questions from students as the ISS flew about 250 miles above them.

Hines’ answer of pre-packaged, dehydrated foods such as a combination of turkey and noodles didn’t sound too appealing to Aiden, who said he likes noodles but not the turkey. Given the choice, he’d pick pasta any day, Aiden said.

From March:What’s it like to live in space? Gifford students to find out

Other questions from students included how do you move around in space; did you feel any heat during launch; and what do the astronauts do in their spare time?

The crew described their favorite activity as gathering together for dinner, which they said requires them to be tethered to the table with Velcro. They also have an entertainment system onboard and can call family and friends back on Earth.

Florida school one of 10 chosen nationwide to talk to ISS

The Gifford Youth Achievement Center was one of 10 schools nationwide scheduled to talk to the ISS Wednesday as part of a program offered through NASA.

The school applied for the chance to speak to the crew from Expedition 67 for about 20 minutes last fall, and was chosen in March for Wednesday’s downlink with the ISS through the Johnson Space Center in Houston.

Astronauts living in space on the orbiting laboratory communicate with NASA’s Mission Control Center in Houston 24 hours a day through the Near Space Network Tracking and Data Relay Satellites (TDRS). The connection from Gifford to the ISS was made with the assistance of Indian River County’s technology department, which projected the downlink on a huge screen set-up in the GYAC gymnasium.

According to NASA, linking students directly to astronauts aboard the space station provides unique, authentic experiences designed to enhance student learning, performance, and interest in science, technology, engineering, and mathematics. It supports the work students have been doing this summer at GYAC, with experiments including building solar panels, hydroponic gardens and robotics.

Prior to the livestream with the ISS, students showcased their projects during a Science Fair, giving families and friends the chance to see what they have been working on with their class during the summer.

Korian Taylor, 8, Aayden Holmes, 8, and Ashlyan Patti, 9, were anxious to share the details of their project about the best types of soil to grow plants, concluding it is manure that makes the best planting material because of its rich, fertile nutrients.

Faizan Zaidi has been helping student at GYAC with their experiments and said the “Living in Space, Preparing on Earth” Science Fair was sponsored by NASA to show how the projects could benefit NASA’s efforts in space. Other assistance came from aerospace companies including L3 Harris and RedWire Space, which provides the solar panels for the ISS.

“These programs are really important,” said Faizan, who goes by Faz. “In school, kids read text books but performing these experiments is really hands-on learning. When you have a place like the Gifford Youth Achievement Center, it creates an environment where students are more engaged in fun and practical learning.”

Curtis Webb, who directs the youth programs for the GYAC, reminded students the opportunity to speak with astronauts on the ISS was a once-in-a-lifetime experience.

“This is something you can always dream about,” said Webb. “This is so special and something we can be proud of doing in Indian River County.”

Janet Begley is a local freelance writer for TCPalm.com. If you like articles like this and other TCPalm coverage of Treasure Coast news, please support our journalism and subscribe.

Arrowverse replaced with a new universe on Superman and Lois

Just how big can a super-Earth get while staying ‘livable’?

Scientists Glimpse The Earliest Dark Matter Ever Observed in The Universe

An Interstellar Meteor Struck the Earth in 2014, and now Scientists Want to Search for it at the Bottom of the Ocean

Something Wild: Are there more bobcats in NH? Or just...

The newest superfood is good for humans and the planet

NASA is slowly powering down the Voyager probes. Here are...

If Neptune’s orbit moves 0.1%, it could destabilize the entire solar...

The Astrology Of August 2022 Includes Uranus Retrograde & A Rare...

Black - July 29, 2022
0
It may still be hot out, but we're slowly and surely approaching the end of summer. The cosmic events taking place this month...