By Alastair Talbot For Dailymail.Com

HAS statement released by the world’s largest beverage corporation was released on Wednesday, announcing the change starting on August 1.

Sprite’s noticeable green bottles contain colored polyethylene terephthalate (PET), which is recyclable material that is ‘more often converted into single-use items like clothing and carpeting that cannot be recycled into new PET bottles.’

‘Taking colors out of bottles improves the quality of the recycled material,’ said Julian Ochoa, CEO, R3CYCLE, which is working with Coca-Cola to enable recycling bottle-to-bottle.

‘This transition will help increase availability of food-grade rPET. When recycled, clear PET Sprite bottles can be remade into bottles, helping drive a circular economy for plastic,’ he added.

A newly designed logo displaying the soda’s name in white on a green wrapper will also be introduced next month in a bid to display a more ‘consistent look and voice around the world,’ Coca-Cola revealed.

The old green colored Sprite bottle (left) will be replaced by the new clear plastic bottle on August 1, according to the Coca-Cola Company, in an effort to reduce plastic waste

Other soda brands owned by Coca-Cola that use green bottles, such as Fresca, Seagram’s and Mello Yello, will also transition to clear plastic containers in the next couple of months, the company also announced.

Coca-Cola has often faced backlash in the past for contributing to worldwide pollution, due to its high usage of plastic waste. In 2021, environmental firm Break Free From Plastic announced the company as the largest plastic polluter in the world after 20,000 discarded plastic bottles featuring Coca-Cola brands and logos were found on beaches and parks in 45 countries.

The company said its environmentally friendly transition is expected to lower an estimated 20 million pounds of plastic water compared to 2019, ‘and cut more than 25,000 metric greenhouse gas emissions (creating bottles from recycled plastic use less energy than virgin PET) in 2023 alone. ‘

‘The shift supports both DASANI’s pledge to remove the equivalent of 2 billion virgin plastic bottles from production by 2027 compared to 2021 levels and the company’s goal to use at least 50 percent recycled material in its bottles and cans by 2030,’ the statement released by Coca-Cola read. 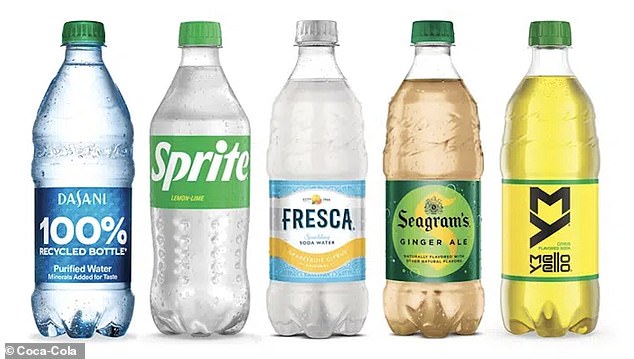 Mello-Yellow, Seagram’s and Fresca (all owned by Coca-Cola) will also transition from colored plastic bottles into transparent ones in the next couple of months, while Dasani water bottles are now being sold in 100 percent recycle bottles, the world’s largest beverage company also announced on Tuesday

On Tuesday, Coca-Cola Global reported its sales volumes rising by 8 percent in the second quarter of this year. The company is encouraged by buoyant demand for sugary sodas in the face of price increases to combat higher costs.

Its sales increase is powered by growth in both developed and emerging markets, while average selling prices increased about 12 percent.

The results highlight the resilience of packaged food makers, especially in the US, as consumers prioritize spending on eating at home rather than at restaurants in the eve of a potential recession.

Coca-Cola was preparing for an economic downturn with investments in smaller and cheaper packaging, the company’s Chief Executive James Quincey told Reuters.

However, the company’s products have historically been among the last to see a slowdown in demand during recessions.

FUND THE PLANET Announces the Acquisition of More Rainforest for its...

Our COVID reporter got COVID. He was fully vaccinated. ...

The Hunt for an Easy Way to Recycle Old Clothes

Prince William shouts at photographer who ‘stalked’ his children

See ringed Saturn on a clear evening in mid-August

Some of WA’s tiniest residents to be launched into space

Black - July 21, 2022
0
A series of drastic consumption cuts and difficult management decisions will be necessary to stabilize the Colorado River system amid a 23-year-long “Millennium Drought,”...
Environment

Nature Is Front and Center in Proposed Museum Campus Makeover |...