An international team of 23 researchers led by Maria Dainotti, Assistant Professor at the National Astronomical Observatory of Japan (NAOJ), has analyzed archive data for powerful cosmic explosions from the deaths of stars and found a new way to measure distances in the distant Universe.

With no landmarks in space, it is very difficult to get a sense of depth. One technique astronomers use is to look for “standard candles,” objects or events where the underlying physics dictate that the absolute brightness (what you would see if you were right next to it) is always the same. By comparing this calculated absolute brightness to the apparent brightness (what is actually observed from Earth), it is possible to determine the distance to the standard candle, and by extension other objects in the same area. The lack of standard candles bright enough to be seen more than 11 billion light-years away has hindered research on the distance Universe. Gamma-Ray bursts (GRBs), bursts of radiation produced by the deaths of massive stars, are bright enough, but their brightness depends on the characteristics of the explosion.

Embracing the challenge of attempting to use these bright events as standard candles, the team analyzed archive data for the visible light observations of 500 GRBs taken by world-leading telescopes such as the Subaru Telescope (owned and operated by NAOJ), RATIR (Note 1 ), and satellites such as the Neil Gehrels Swift Observatory. Studying the light curve’s pattern of how the GRB brightens and dims over time, the team identified a class of 179 GRBs which have common features and have likely been caused by similar phenomena. From the characteristics of the light curves, the team was able to calculate a unique brightness and distance for each GRB which can be used as a cosmological tool. 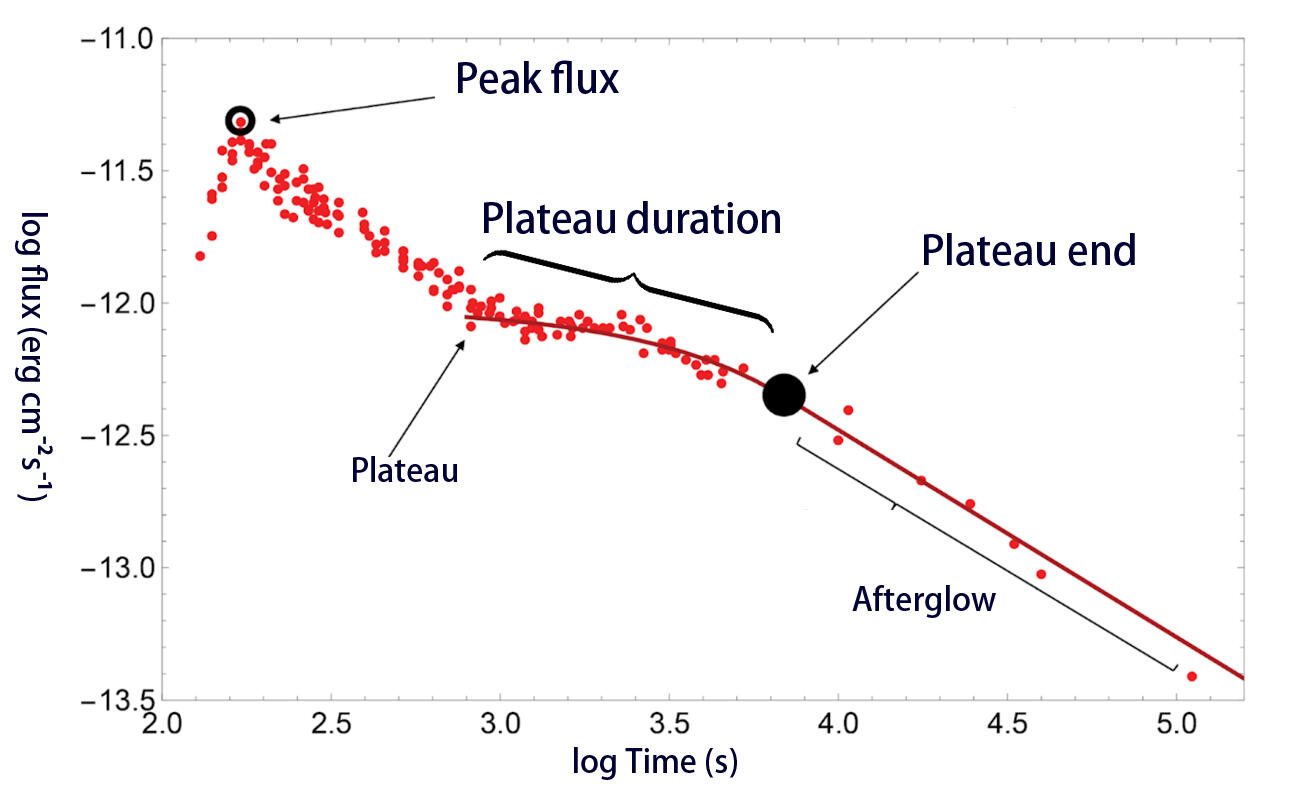 Figure 2: An example of a GRB luminosity curve. The team focused on 179 GRBs with a “plateau” in which the brightness remains almost constant after dimming some from the prompt peak emission. They examined the relationship between three parameters: the peak luminosity of the GRB, the luminosity at the end of the plateau, and the duration of the plateau. (Credit: Maria Dainotti et al.)

Figure 3: Distribution of GRBs when plotted in a three-dimensional parameter space defined by “peak luminosity of GRB,” “luminosity at the end of plateau,” and “duration of plateau.” The team showed that 179 of the examined GRBs are distributed on a certain plane. Using the three-dimensional correlations, it is possible to calculate unique brightnesses for these GRBs. (Credit: Maria Dainotti et al.)

These findings will provide new insights into the mechanics behind this class of GRBs, and provide a new standard candle for observing the distant Universe. Lead author Dainotti had previously found a similar pattern in X-ray observations of GRBs, but visible light observations have been revealed to be more accurate in determining cosmological parameters.

Dianotti says “The optical three-dimensional correlations are intrinsic and independent of selection bias or redshift evolution. Therefore, this correlation allows us to pinpoint a common emission mechanism, most likely a magnetar, for this class of GRBs that have peculiar traits. In the future, these GRBs can be used as cosmological standard candles, as they will provide a higher precision in determining cosmological parameters than GRBs in the X-ray fundamental plane.”

These results appeared as Dainotti et al., “The Optical Two and Three-Dimensional Fundamental Plane Correlations for Nearly 180 Gamma-Ray Burst Afterglows with Swift/UVOT, RATIR, and the SUBARU Telescope,” in the Astrophysical Journal Supplement Series on July 21, 2022.

(Note 1) Professors Prochaska and Ramirez-Ruiz (UCSC) contributed to the design, fabrication, and commissioning of the Reionization and Transients Infrared/Optical (RATIR) camera on the 1.5-m telescope at the San Pedro Martir Observatory.

About the Subaru Telescope
The Subaru Telescope is a large optical-infrared telescope operated by the National Astronomical Observatory of Japan, National Institutes of Natural Sciences with the support of the MEXT Project to Promote Large Scientific Frontiers. We are honored and grateful for the opportunity of observing the Universe from Maunakea, which has cultural, historical, and natural significance in Hawai`i.

Democrats’ ‘Climate Bill’ Puts Polluters before People and the Planet

What Is The Kardashev Scale?

How saving downtown Joplin helps save the planet

Rewilding the Galapagos can be a model for a new way...

Why this digital artist thing to build on Cosmos and what...

Black - August 14, 2022
0
CryptoSlate chatted with María from Women From Cosmos﻿, a female artist-led collection of hand-drawn NFTs. In the chat, Maria told us:Tell us about...